News: The 10 most popular Spanish tapas for foreigners 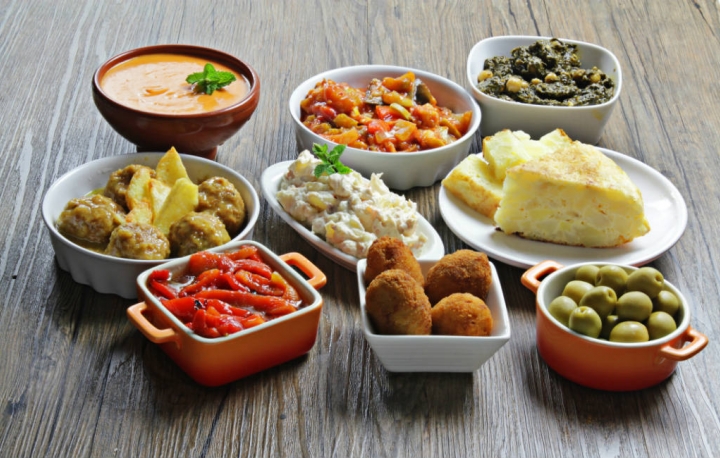 Obviously it is difficult to make a complete list of tapas that are appreciated by the foreigners, but we did our best. For the real tapas lover it will certainly be a recognizable list and perhaps a bit of a cliché but if you, as a reader or a tapas specialist, still have tips we will be pleased to hear that. This is our top 10 of the tapas most popular with foreigners.

The Tortilla de patatas or Tortilla Española is nothing more than a thick omelet with potatoes. This can be mixed with onion, paprika and even Spanish chorizo sausage. The tortilla de patatas can be eaten as a complete meal, but as we are talking about tapas, it can also be cut into cubes and presented with or without bread.

The real Spanish sliced ham is an expensive gastronomic delight where the jamon iberico is the most expensive version. A plate with some thin slices of jamon iberico can easily cost 20 euros or more but it is also very tasty. Eat this ham as a small bite or on bread.

Pan con tomate is bread from the grill rubbed with garlic, tomato, olive oil and salt. This pan con tomate can be eaten as a tapa, as a starter or in between, with the barbecue or meal. The bread with tomato can be combined with jamon or with alioli (garlic mayonnaise). In Spain the slices of the bread of the country (or country bread) are usually used.

Albondigas are meatballs made according to Grandma's recipe. These balls are served in a bowl with a homemade tomato sauce with peas and sometimes potatoes.

We are talking about croquettes, but they have nothing to do with the Dutch meat croquettes. The Spanish croquetas are usually filled with ham, fish, chicken or cheese and are served deep fried on a plate.

The pescado frito is a typical Andalusian tapa where fish is dipped in breadcrumbs and then deep fried. According to the Spanish method the fish has to be fried in olive oil because it benefits the taste but actually frying in olive oil is reasonably normal in Spain.

A pincho moruno is a meat skewer which is slightly more spicy than normal. This is often served on a slice of bread or baguette with coarse sea salt on top. The meat usually comes from the pig or from the chicken and is spicy because of the added pepper. The pincho moruno originates from southern Spain but is eaten all over the country.

Boquerones and vinagre are nothing more than anchovy in vinegar. This fish is served on a plate, sprinkled with vinegar, garlic and parsley. Basically the fish is eaten raw but there is a whole process of sometimes two days in advance to marinate the anchovy with vinegar and then add the other ingredients. The head of the anchovy will be removed before the marinating process.

No properties found that match your search.