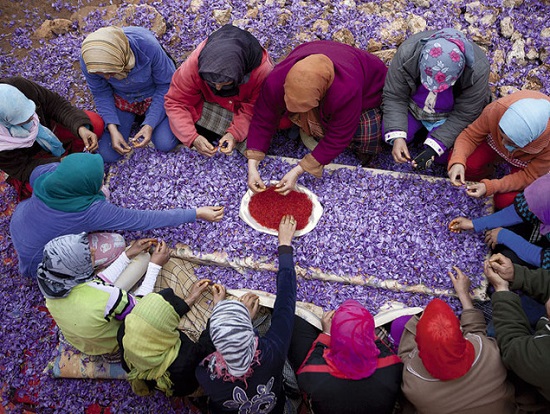 MADRID - You may have heard of it and maybe even tried it in a dish. If you bought it then you know for sure because the real saffron is very expensive. Saffron is widely used in recipes in Spain and of course in other countries and in Spain the paella is the most famous dish. The yellow color of the paella list comes from the saffron. The saffron is very expensive due to the fact that a lot of flowers are needed to obtain a few pistils and is therefore also called the red gold. In Spain the harvest of the saffron started again in early November.

While the largest producer of saffron (in Spanish Azafran) is Iran, Spain can not complain about the amount of saffron harvested in the country which is also of excellent quality. The most famous saffron in Spain is the Azafrán de la Mancha, from the Castilla la Mancha region. For the precious saffron, parts of the pistils of the flowers are harvested manually: the styles and the stamps, which are both flavor and coloring. The stamens of the saffron crocus do not have any culinary value. After harvesting, the styles and stamps are dried. This drying takes place in drying cabinets with a warm air stream or in the sun. The highest quality saffron comes from the blood red stamps, the upper part of the dried styles.

Saffron is widely used in Spain in, among other things, the paella, while the Italians process the saffron in the risotto and the Belgians in the rice pudding. Do not confuse the saffron with the "fake" saffron or saffron substitutes found in the supermarkets, the so-called safflower, which may give the same color but are not the same (not even the price). Indian, turmeric, which is similar to the saffron because it also gives the yellowish color to a dish, but the taste is completely different, so a real paella maker will only use the real and expensive saffron.

Saffron has a bitter taste and a pleasant aroma reminiscent of honey. Only one wire of saffron is enough to color a liter of boiling water in an hour deep yellow. Saffron is also available finely ground. The labor-intensive cultivation makes saffron into a precious spice, it is therefore also called the red gold. Saffron is normally sold per gram, fresh or in pre-packaged boxes and pouches.

The saffron crocus, a purplish flower, needs a continental climate and does well in both hot and cold weather. The flowers do not need much water, but there are two periods, in spring and autumn, that the flower bulbs need water to grow and bloom. The flower bulbs are placed during the months of June to September while the harvest takes place at the end of October or the beginning of November. Given that the flower grows in the early morning, the flowers must be picked very early in the morning to avoid prolonged contact with the sunlight.

Immediately after the harvest, the flowers are taken to a warehouse or house where the separation process begins and the stamps are separated from the rest of the flowers. This task is done by hand and called "Monda" or "esbrinar", which is often still done in private homes. It is considered the most vulnerable part of the process and is therefore mainly done by women because they are better with the hands (apparently). A kilogram of flowers yields only 200 grams of saffron that is immediately ready for consumption. To obtain a kilo of saffron, no fewer than 250,000 flowers are needed.

In the Castilla la Mancha region, there is a saffron known for the Denominación de Origen DO Azafran de la Mancha classification. According to experts, this is the best saffron in the world harvested in the provinces of Albacete, Toledo, Cuenca and Ciudad Real. Outside these regions, saffron is also grown and harvested in parts of Aragon, Valencia and Catalonia, but the quality is often different. At the end of October (in 2016 this was from 28 to 30 October), Consuegra, known from the mills of Don Quixote, will host a traditional festival called "Fiesta de la Rosa del Azafran"